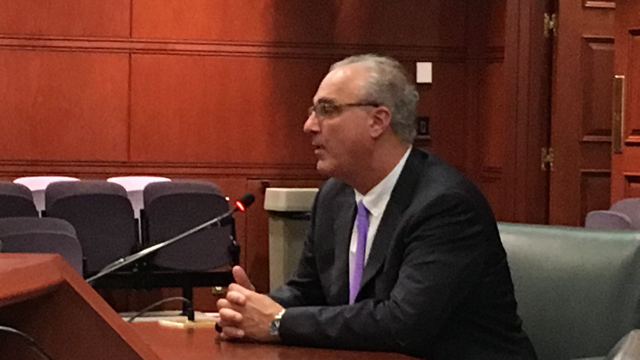 Testimony in Support of S.B. No. 172 (RAISED) AN ACT CONCERNING ACCESS TO TREATMENT FOR OPIOID USE DISORDER IN CORRECTIONAL FACILITIES.

Senator Gerratana, Senator Somers, Representative Steinberg and distinguished members of the Public Health Committee. My name is Jeff Grant and I am Executive Director of Family ReEntry, a criminal justice nonprofit with offices and programs in eight Connecticut cities.  Founded in 1984 in Bridgeport, Family ReEntry’s mission is to develop, implement, and share innovative and cost-effective solutions to the unprecedented numbers of people involved in the criminal justice system.  We contract with the Connecticut Department of Correction and the Court Support Services Division, as well as other state agencies, to provide services inside and outside of prison, in support of DOC’s mission to “protect the public” and “provide offenders with opportunities for successful community reintegration.”  Our high-impact services for youth and families tackle the root causes of violent crime through evidence-based social, cognitive and behavioral interventions that restore healthy family functioning and assist returning citizens in becoming positive contributing members of society. For example, participants in our court-referred domestic/family violence programs (n=1539) for 2014-2015 had a re-arrest rate of 8%, which is 60% lower than the program benchmark for re-arrest rates set by the state (20%). Many domestic violence incidents in our state are fueled by drug and alcohol addiction.

I would like to take this opportunity to applaud the bold steps that this administration has taken in progressive criminal justice reform policy and legislation.  I served thirteen and a half months in a federal prison myself for a white-collar crime I committed in 2001 after an over ten (10+) year addiction to prescription opioids. I am now over fifteen (15+) years clean and sober. I kicked the habit in the State of Connecticut after committing my crimes, attended recovery meetings here until I went to prison, attended court-mandated drug and alcohol counseling upon my return and have lived and remained sober in Connecticut for the over ten (10+) years since my return. Without support from my wife, the faith community, opportunities to volunteer with Family ReEntry when I came out of prison, and the larger Connecticut social services safety net, it is unlikely that I would be standing before you today as a tax-paying citizen, non-profit leader and advocate for enlightened criminal justice.

With more individuals addicted to, and incarcerated for crimes related to, opioid addiction, it is all the more urgent that we increase adopt legislation directly responsive thereto.  Please note:

As the number of people with addiction to opioids continues swell, it would behoove the legislature to focus on solutions for those in state custody. Everyone will be the beneficiary from these investments that will help restore healthy families, increase public safety, rebuild our communities and continue to reduce our prison population.

Thank you for your attention to this important issue.  Please do not hesitate to contact me with any questions.

[i] Yale’s 2016 plan for Connecticut Opioid Response (CORE) states that  Retrieved from http://www.plan4children.org/wp-content/uploads/2016/05/COREInitiativeForPublicComment.pdf