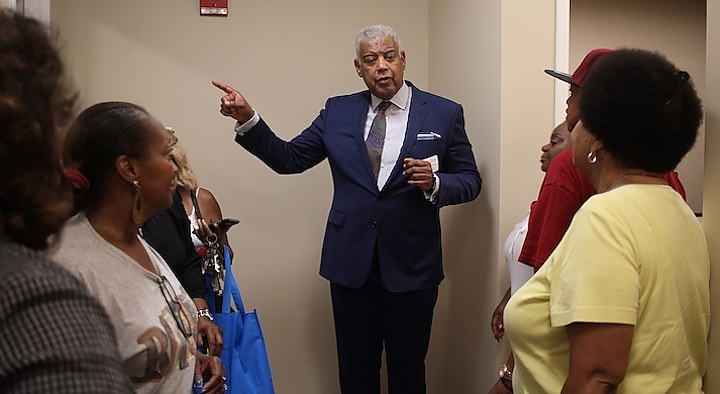 by Markeshia Ricks | Reprinted from New Haven Independent, May 14, 2019

When Cornell Scott Hill Health Center CEO Michael Taylor was a kid growing up in West Philadelphia, he didn’t know that he would one day lead one of Connecticut’s oldest and largest community health centers.He just knew he wanted to help people like his friends who one by one found themselves incarcerated.

“Very simply put, I am a kid still from the ghetto in Philadelphia,” he told Jeff Grant, co-host of WNHH FM’s “Criminal Justice Insider,” during a recent episode.

“That was my upbringing. When you are raised in that kind of environment, where people face sometimes extraordinary challenges just in everyday life. If you have a heart you want to find ways of helping people.”

Taylor had a heart. He also had eight other friends with whom he was “thick as thieves and did everything together.”

After watching each of the boys he grew up with tangle with the criminal justice system at some point in their lives, Taylor said ,he knew he wanted something different. He’d hoped to become a doctor as a way to help people who grew up as he did, but he wasn’t very good at science. He pursued a degree in accounting from Northeastern University in Boston.

“I feel very blessed that I have been able to escape that and turn my life in a different direction,” Taylor said. “I give a great deal of credit for that to my parents and by the grace of God.”

He didn’t forget those friends. He still keeps in touch with those boys, turned men, whom he considers “lifelong friends.”

“Some were never able to recover from their incarceration experience, and their lives are quite hard,” he said,

Taylor’s background and the connections that he maintains to his friends influenced his decision to enter the health care field on the business side. He started his career in hospital administration in Boston. He worked for a number of large healthcare accounting and consulting firms before getting involved in the community health center movement back in the late 1980s and early 1990s. He estimated to Grant that he has worked in some 300 health centers across the country over the years.

Before coming to Cornell Scott in 2008, first as a consultant, then as chief operating officer, and now as the CEO, he had an epiphany.

“The epiphany was that I was a health center patient as a kid,” Taylor recalled. “I didn’t know it at the time. To me, it was just the doctor’s office.”

Taylor ended up serving on the board of that very community health center in West Philadelphia, Spectrum Health Service, that he visited as a child. He’s also friends with the center’s current CEO. Now he is at the helm of a community health center that he said is in the top 1 percent of providers in the country of medical and dental services. Cornell Scott also provide an array of behavioral health services including mental health and substance abuse help, services that are often necessary for successful reintegration after incarceration. The center has undergone an expansion to provide more of those services.

Previous articles based on the program: