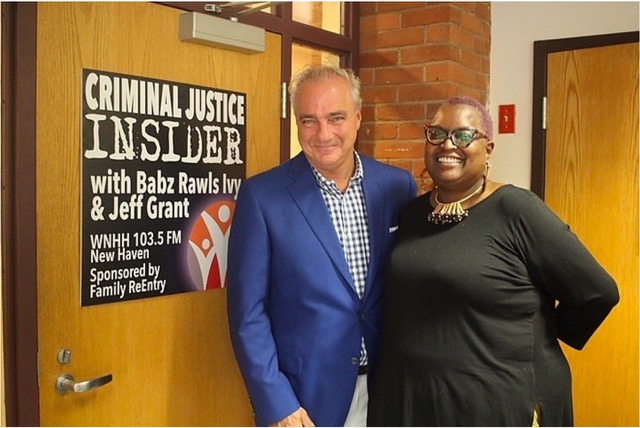 Join us on Criminal Justice Insider as Babz Rawls Ivy and Jeff Grant take things personally, First and Third Fridays at 9 am & rebroadcast at 5 pm on WNHH 103.5 FM New Haven, live-streaming on newhavenindependent.org. Call-in # (203) 872-7356‬. On Nov. 3rd CT State Legislator Robyn Porter was our guest. On Nov. 17th CT Commissioner of Correction Scott Semple was with us in the studio. On Dec. 1st we talked with SCSU Professor Amy Smoyer and NH WRWG Co-Chair Jackie Lucibello. On Dec. 15th we were joined by Lorenzo Jones, Co-Executive Director of the Katal Center for Health, Equity & Justice. On Jan. 5th our guest will be Danielle Cooper, Assistant Professor of Criminal Justice and the Interim Director of Research at the Tow Youth Justice Institute at the University of New Haven. On Jan. 19th we will be joined by Cynthia Farrar, Co-Founder of Purple States TV and the documentary, “Life on Parole.” Other upcoming guests include U.S. Senator Chris Murphy, , Carlah Esdaile-Bragg of Cornell Scott Hill Health, Flikshop CEO Marcus Bullock, Malta Justice Initiative Chairman John Santa, Andrew Clark Director of the Institute for Municipal and Regional Policy at CCSU, Christopher Llinas, Esq., and many more. Sponsored by Family ReEntry – Serving the Justice Community Since 1984™, and the Community Foundation of Greater New Haven.

The airwaves are open to discuss Criminal Justice – from the Inside. A new show, Criminal Justice Insider, co-hosted by WNHH-FM’s Babz Rawls-Ivy and Family ReEntry’s Executive Director, Jeff Grant, takes a unique perspective on all issues of the justice system, including the effects of incarceration and the challenges faced by ex-offenders.

A major intrigue of the program can be found in the
personal background stories of the show’s co-hosts. Rawls-Ivy and Grant have both served prison sentences. As ex-offenders, they are well aware of the challenges, inside and outside, of the legal system and the prison system. They are also both examples of success and hope for others.

The show, which debuted last Friday, welcomed a much larger than expected audience, and WNHH immediately doubled its originally scheduled programming. Criminal Justice Insider is now slated for a full hour at 9:00AM on the first and third Fridays of each month.

Rawls-Ivy, who is also the host of WNHH’s daily “LoveBabz LoveTalk,” and editor of the Inner City News, proclaimed, “Jeff and I have talked about doing something like this for a while. When we pitched the topic to the station, we presented so many aspects that affect so many people, not just in Connecticut but all over the country, the content designed itself.”

As the executive director of Family ReEntry, a social service organization in Bridgeport that works with individuals and their families who have been directly impacted by incarceration, Grant is a perfect complement to the show. “This show is important because we go deep into the personal challenges and successes that individuals, families and whole communities experience. There are not many places that welcome and encourage the authentic, vulnerable side of the criminal justice experience.”

Working in affiliation with local news source, The New Haven Independent, a recap of each Criminal Justice Insider show and a preview of upcoming shows will be published. For anyone who hasn’t already heard the program, the debut broadcast is now available in its entirety on SoundCloud and to keep up with the topics of discussion, a Facebook page has also been set up at Criminal Justice Insider.