Connecticut Gets & Gives A #SecondChance, By Andy Thibault – Guest Blogger

Prisonist.org: Blogs, Guest Blogs
& News Concerning National and
International Criminal Justice Themes
Connecticut Gets & Gives
A #SecondChance
By Andy Thibault – Guest Blogger
How Much Has Connecticut Progressed
Since Prisoners Were Punished
For Therapeutic Writing?
Our post Ready For Freedom (Oct.29th)
announced a panel of Connecticut criminal justice
experts that will be speaking at the Hartford Library
on Weds., Nov. 18, 2015.  The panel’s moderator,
Andy Thibault, guest blogs below for prisonist.org.
__________

HARTFORD – Connecticut has progressed in some measure since prisoners were punished by the full weight of state government for therapeutic writing about a dozen years ago.

We’ll get some solid answers from a spectrum of well-informed sources – including prison authors and top state officials – during a #SecondChance forum Wednesday at 6 p.m. the Hartford Public Library. The official program title is: “Ready for Freedom? Life after Prison in Connecticut.”

Panel participants will include Scott Semple, Commissioner of the Connecticut Department of Correction, Deborah Rogala, Program Operations Director at Community Partners in Action, Robert J. Devlin, Jr., Chief Connecticut Criminal Court Judge, and Bonnie Jean Foreshaw, incarcerated for 27 ½ years and granted clemency in 2013 after appeals and a review of her case. Also participating: Gary Roberge, Director of Adult Probation and Bail Services, State of Connecticut, the Rev. Jeff Grant, Director of the Progressive Prison Project, and Robin Cullen, of Color Outside the Lines, an organization that facilitates groups in prisons and community outreach programs.

Foreshaw and Cullen both contributed to the critically-acclaimed book, “Couldn’t Keep It To Myself – Testimonies From Our Imprisoned Sisters,” edited by the novelist and jailhouse teacher Wally Lamb and published by Harper Collins with Judith Regan. 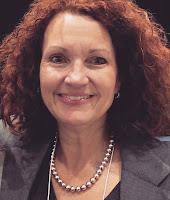 “Couldn’t Keep It To Myself” grew out of the despair that engulfed the Niantic jail in 1999. Two suicides and a number of suicide attempts led staff members including librarian Marge Cohen and teacher Dale Griffith to canvass peers and inmates about what might help. Dancers, musicians and businesswomen came to the jail to volunteer. There was also talk that writing might help as a coping tool.

Cohen reached out to Lamb, who at that time was studying how to say no. Lamb said yes, he would do a workshop.

“You coming back?” he was asked as the 90-minute session ended. “Uh, well OK,” he said. “Write something and I’ll see you in two weeks. Any subject, two pages minimum.”

Thirty students dwindled to 15. One woman sat hunched forward, fists clenched on her desktop, silent, for 90 minutes. In the third session she raised her hand. She read a story of her life, in two pages. Like many of the tales of her peers, it included incest, abuse, depression, indifference. Lamb said the writer, Diane Bartholomew, “sledge-hammered the dam of distrust, and the women’s writing began to flow.”

Three workshops turned into 50 and they stopped counting [more than 12 years ago]. The writing got better and better. Lamb taught the students how to recast memories as dramatic scenes. Then he read a piece to powerhouse publisher Judith Regan, who wiped her eyes and said, “Shall we do a book?”

The inmates did what they were supposed to do: They confronted themselves and developed the will to strive for better lives. They offered a message of redemption and hope.

“He [Lamb] helped the women to be more realistic,” Foreshaw said recently, “instead of taking that way [suicide] out.”

The state played dumb during the Rowland administration, ignoring Lamb’s requests for feedback on this success story. Then, Connecticut’s state government attacked with a vengeance.

Then- state Attorney General Richard Blumenthal filed suit, placing liens against their virtually non-existent assets ranging up to $913,777 for Foreshaw. Cullen, who had served her time and would go on to work for Mothers Against Drunk Driving, was confronted at home by a deputy sheriff.

The state of Connecticut was just warming up.

The Correction Department spokesman denied that the work of the writers was destroyed, removed or taken away. In fact, hard drives, diskettes and personal papers were all taken away from members of the writing group. This was the department’s response to the literary group PEN awarding writing group member Barbara Parsons a $25,000 prize in absentia for fighting to safeguard the right of free expression. The award was sponsored by A.E. Hotchner and Paul Newman.

The memo – one of two written by Green – came days after The Norwich Bulletin reported that Lane had won the prestigious PEN award for freedom of speech.

Green, in cooperation with the warden at the time and other higher-ups, went out of her way to give the writers the message: “The Thursday Writing class is being reviewed. Therefore, it is suspended. Students involved in this class will not engage in any activities related to this program. All computer disks, as are, are to be returned in to my office immediately and all information on hard drives is to be removed. Computers, other equipment, time and space, are not to be used for purposes related to the Thursday Writing Class.”

Blumenthal ultimately withdrew the lawsuit – citing the rehabilitative nature of the book – and as a U.S. Senator he later supported Foreshaw in her clemency bid. He negotiated a royalties settlement with the prison writers that funneled a total of $4,000 to the re-instated writing program and the state Department of Mental Health and Addiction Services.

I got into this story reading “Couldn’t Keep It To Myself” and attending the writing workshop at the Niantic jail. Over more than a decade, I researched and wrote extensively about police, prosecutorial and judicial misconduct in the Foreshaw case. The turning point came after publishing the long-suppressed memo Judge Jon Blue wrote as a public defender: Blue detailed the jacked-up charge of premeditated murder of a person Foreshaw had never met in an accidental shooting and the myriad failures of her unseasoned lawyer to provide an adequate defense.

In the intervening years I got to know Parsons, Cullen and Foreshaw as fellow writers, gaining a respect for their journeys of survival.

Foreshaw has spoken eloquently about her remorse, prison experience and challenges on the outside during appearances at Gateway Community College in New Haven and the Oliver Wolcott Library in Litchfield. You can be sure she won’t hold anything back during the Nov. 18 forum.

Nor will the other participants.

Scott Semple, the new Correction Comissioner, is a strong advocate for Gov. Dannel Malloy’s Second Chance Society – which was the result of bipartisan support. Semple has presided over a reduction of about 4,000 inmates in Connecticut’s prison system, down from a high of about 20,000.

“I am open to any questions and looking forward to a learning experience,” Semple said in advance of the forum.

Another participant, Gary Roberge – Director of Adult Probation and Bail Services – is prepared to address questions including how the state can help with jobs and housing.

The 90-minute forum will begin with statements from the participants and will include questions from the audience.

Big thanks to Jeffrey Mainville of the Hartford Public Library for putting this program together and for asking me to be the moderator. We have a talented and diverse crew for this event, all working in earnest to improve the quality of life in Connecticut. 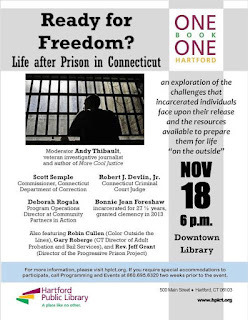 Andy Thibault, author of  “more COOL JUSTICE’ , covered the Boston Marathon bombing trial for NBC News and WhoWhatWhy.com.  Thibault was honored in 2014 by the Connecticut Council on Freedom of Information with the Stephen Collins Award for his “many contributions to the cause of open and accountable government and a free and vigorous press.” Currently, he works as a private investigator for Integrated Security Services of Hartford. Andy’s Twitter handle is @cooljustice. He can be reached at tntcomm82@cs.com.
__________
Progressive Prison Project/
Innocent Spouse & Children Project
Rev. Jeff Grant, JD, M Div, Minister/Director
jgrant@prisonist.org
(o) 203-769-1096
(m) 203-339-5887
Twitter
Facebook
Linked In
Pinterest
Google+Tumblr